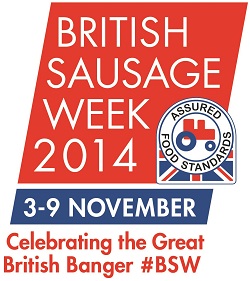 Sausages are one of our nation’s best loved products and British Sausage Week, now a recognised event within the British culinary calendar, marks an annual celebration of the taste, quality and diversity of the traditional British Banger. Promoting the hard work of the British Sausage Appreciation Society, this year our national Sausage Week runs from the 3rd-9th November.

British Sausage Week is a much loved annual event at Nelson Hotels, and this year is no different! Each of the Nelson Hotel’s Cheshire based gastro inns have decided to once more get involved in this national celebration. Already renowned for their wholesome locally sourced produce, The Fishpool Inn, The Bear’s Paw and The Pheasant Inn are joining in on the activities and asking their customers to get involved too.

The Pheasant Inn in Tattenhall has opened a poll on their Facebook page for fans to vote for their favourite banger. The winning combination will be added to the specials board, along with Head Chef’s two favourite sausage flavours, during British Sausage Week.

Alongside this, The Fishpool Inn located in picturesque Delamere is hosting a ‘Suggest a Sausage and Win!’ competition, where entrants are invited to think of their favourite flavour combinations as well as the dish that brings out the best in that banger. The winning taste infusion will appear on the menu during British Sausage Week and best of all the winner will enjoy a 3 course dinner for two – featuring the winning entry – at The Fishpool Inn. With over 70 entries within the first week of the competition opening, there has already been some interesting and diverse suggestions, such as stilton, caramelised onion and pancetta sausage; pork, Bramley apple and dark treacle sausage served with butternut squash mash, red cabbage, red onion gravy and Yorkshire pud; and wild boar sausage with Bury black pudding, poached goose egg and cider fried bread.

To further celebrate excellent local produce, The Bear’s Paw in Warmingham will be pairing their favourite sausage dish; venison sausage and ale casserole, with pickled red cabbage and creamy dauphinoise potatoes, with a pint of local real ale from the nearby Mobberley Fine Ales. This perfect combination will not only be available during British Sausage Week, but will be featured for a whole month from 27 October giving you plenty of time to honour the Great British Banger.

Nelson Hotels Group Executive Chef, Paul Prescott, comments “The importance of using locally sourced, quality produce in our dishes is paramount. We are thrilled to be joining in with British Sausage Week, as it raises awareness of using Red Tractor Pork throughout the UK. We are looking forward to the activities involved in this year’s celebrations and to marking the start of this chilly winter season with some warming comfort food.”

If you think you have a winning flavour combination then why not join in on The Fishpool Inn’s facebook page facebook.com/TheFishpoolInn or vote for your favourite sausage on The Pheasant Inn’s Facebook page poll facebook.com/ThePheasantInn. And if you’re simply looking forward to indulging in some Great British bangers, then make sure to visit one of these delectable gastro inns early November.